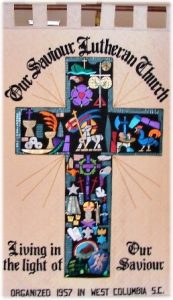 The symbols adorning our special Anniversary Banner are representations of the symbols in the stained glass windows of our sanctuary.  This description begins at the bottom of the cross and goes to the top, telling the Old Testament story and leading up to modern times.

At the base of the cross, the black arc represents the darkness which “covered the face of the deep.”  The beginning of the story of Creation is depicted by green living things which God created.  Adam and Eve are seen being expelled from paradise.  The rainbow is arching over Noah’s ark.  Moses is represented by the Tablets of Law.  The fleur-de-lis symbolizes the purity of the Virgin.  The six-pointed star of David topped with a crown refers to the old testament prophecy that the Saviour would come from the lineage of David.  The manger with the child is flanked by three shepherd’s crooks.  To the left of the manger are three crowns under the rays of the star.  To the right of the manger is the symbol for Jesus’ Baptism which combines a fish in water, a chi rho (XP) and the white dove.  The cross of Jesus is purple, encircled with a crown of thorns and flanked by the lesser crosses of two thieves.  To the left of the cross of Jesus is the lighted lamp symbolizing Jesus’ teaching in the temple at the age of twelve.  To the right of the cross two miracles are portrayed:  His first miracle of turning the water into wine and the miracle of  feeding the five thousand.  The left part of the cross beam contains the cup with a cross emerging from it.  This is the cup of suffering.  Next, the bread and chalice of wine and the wheat and grapes represent the Last Supper.  In the center of the cross beam we see Jesus the Lamb of God bearing aloft the banner of the Victory of Life over sin and death.  The right part of the cross beam shows Pilate’s hands being washed in a basin which is a guard’s axe.  Beneath the basin is the empty tomb.  To the right of the basin is the cock which crowed when Peter denied Jesus.  Above the Lamb of God, Luther’s rose typifies the Reformation.  To the right of the rose, the east and west hemispheres are combined in peace under the shelter of the cross.  Above the cross is the 20th Century symbol for peace.  Above the rose, a dark hand and a light hand are clasped in brotherhood.  At the top is the Ship of the Church with a cross-topped mast.

We would like to thank Mrs. Alice Pollock for her vision, insight, and artistry in creating this banner which is truly unique to Our Saviour Lutheran Church.